Error: You do not have javascript enabled. Please turn on javascript for the best experience.
Sorry, the browser you are using is not supported by our progressive web app website. Please use a different browser like Chrome, Firefox, or Edge (version 17 or newer)
Skip to content Skip to product search

Impact resistance is, mechanically speaking, the ability of a material to resist permanent deformation caused by high force or shock applied to it over an extremely short period of time. When this is applied to protective gloves, it is a measure of a glove material’s ability to deflect or dampen an impact enough that it reduces that impact’s capacity to result in injury to the wearer.

How does it work?

Dealing with impacts is far more complicated than it seems at first glance. Other types of resistances, like abrasion or tear resistance, rely solely on the glove material either insulating the wearer’s hand from the hazard, or the material being strong enough to withstand certain applied forces. Impact protection functions by the material’s ability to lessen or dampen the impact of an object against the hand and turn what could’ve been a serious injury into a comparatively lesser knock or bump.

Impact resistant padding works by a combination of two methods: deflection and deceleration. Using a combination of these two methods, we have designed gloves like the IMPC3AM-70 Impact Air Mesh Gloves and AXIMPC5-06 Seamless Impact Cut 5 Gloves that can help protect your hands from dangerous impacts.

Deflection is the ability of the protecting material’s shape to change the direction of an incoming impact and to glance off or turn aside and thereby lessen or prevent injury. An example of deflection is in a game of pool where the cue ball doesn’t connect squarely with another ball but hits it on a side. The other ball still takes an impact, but not nearly as large of one as had the cue ball struck it dead center.

Deceleration reduces impact force by slowing down the time it takes for the impact to occur and by redistributing the sharp, focused force across a larger surface area. By causing the impact to expend energy more slowly and over a much wider area, the overall force felt is much lower and less likely to cause injury. An example of this is a stunt performer jumping off a building and landing on their back on an airbag. By landing on their back, the performer is able to redistribute the impact across more of their body and use the cushion of the airbag to slow them down so that, a normally fatal fall, can be walked away from.

How is it Tested

Under the 2016 revision of the EN388 testing standard impact resistance is tested by having the impact resistant portion of the glove removed and secured flat across a domed anvil underneath of which is a sensor that detects the amount of force that penetrates through the glove material. This sample is then subjected to a blow from a flat, 2.5 kg striker dropped from a sufficient height that it imparts an impact energy of 5 joules. The material is tested four times with each impact force result being recorded.

In order to pass the test, the average force transmitted through the glove material cannot be higher than 7.0 kilonewtons, and no single test result can be greater than 9.0 kilonewton. If the material succeeds in meeting these criteria it is given a pass rating, indicated by a P in the 6th position of the EN388 certification logo. If it did not meet the criteria, it will receive a fail rating, indicated by an F in the same position. An X in that position indicates that the test was not performed on that particular glove.

Even if a particular glove passes the EN388 test there are some important things to keep in mind. First and foremost is to remember that the testing method for whether a glove passes impact resistance only tests the portion of the glove that claims to provide that resistance. It is important to select a glove that provides the protection you need in the areas you need it.

Some gloves, like our TR1-88 Super Hi-Viz Fingerless Gloves and the FRGC2-05 Fabricator Cut 2 Welding Gloves only feature impact protection across the knuckles. Gloves like these are intended for work where impact hazards originate primarily from hands striking other objects, not being the objects struck. 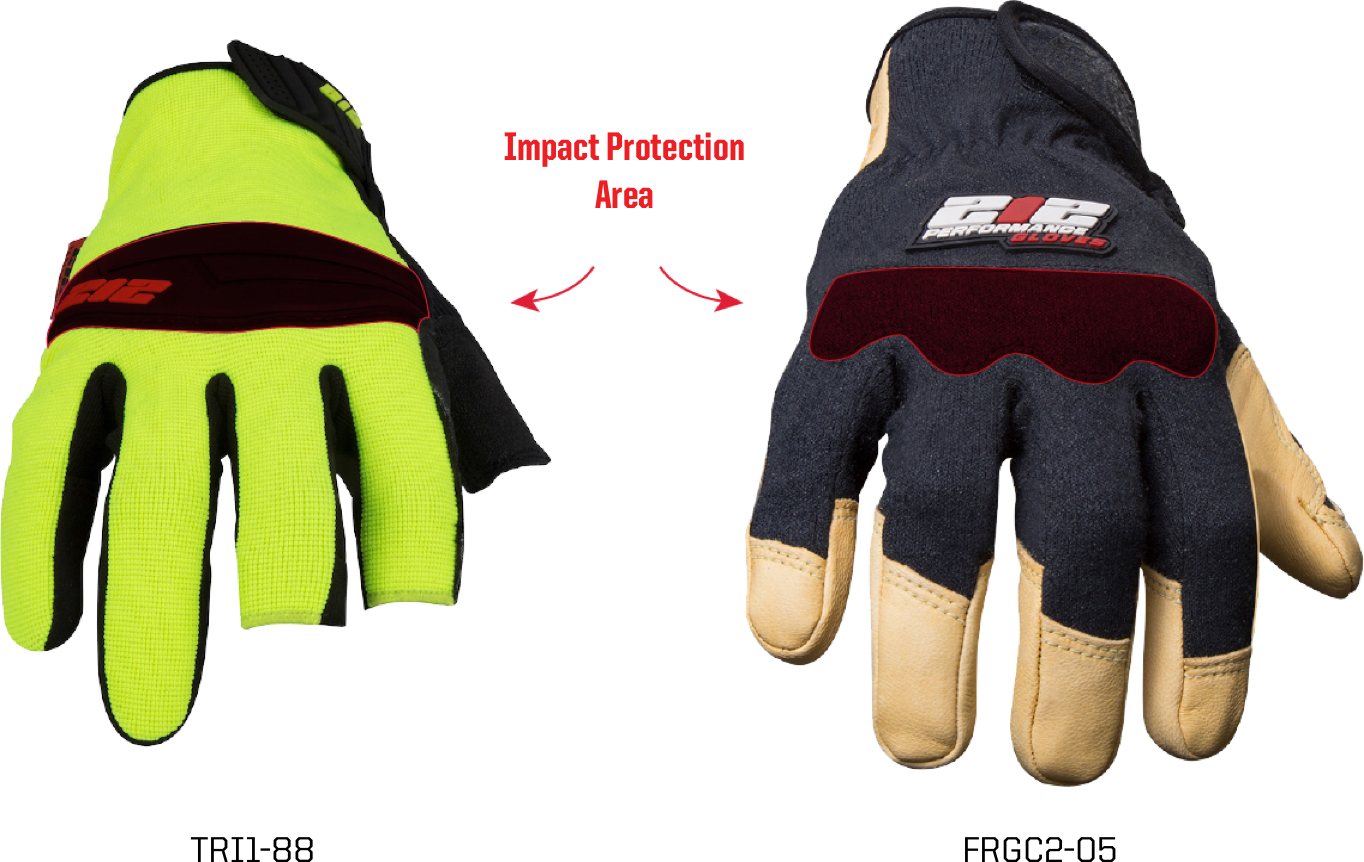 Gloves with Back of Hand, Knuckle and Finger Impact Protection

Other gloves like our IMPC3AM-05 Impact Air Mesh Gloves and IMPC5-88 Impact Cut 5 Super Hi-Viz Gloves have impact protection that covers not only the knuckles, but down the fingers. Many of our AX360 seamless line go even further to cover the entire back of the hand with impact protection. These gloves are better suited to jobs and situations where the impact hazards stem from high and low speed moving objects in close proximity to a worker’s hands.