Error: You do not have javascript enabled. Please turn on javascript for the best experience.
Sorry, the browser you are using is not supported by our progressive web app website. Please use a different browser like Chrome, Firefox, or Edge (version 17 or newer)
Skip to content Skip to product search

This past year the European regulatory standard for the EN388 test, updated their cut resistance testing to include a new metric.

The main, driving reason for the update to the existing method has been the advances made in cut-resistant fabrics, particularly those that include steel or other hardened fibers that add strength to the fabric. These newer fabrics would often blunt the cutting edge of the rotary blades used by the Coup test resulting in far greater cut resistance results given due to the increased difficulty the blade had in subsequent cuts as the existing criteria had the same blade used repeatedly across multiple cuts.

Thus some gloves would be rated for a higher cut resistance than they actually would present in everyday use as they weren't necessarily cut-resistant but were more blade-blunting.

Change for the Better

To address these concerns the EN 388 test for cut resistance received a set of secondary criteria that would come into effect whenever a material was determined to have a blade blunting effect on the blade used in the Coup cut test. This second stage involved a second test using the ISO 13977 method which is very similar to the ANSI cut test and uses the same TDM-100 testing machine.

To determine whether this second set of tests would be administered the Coup testing method was changed to have a maximum of 60 passes on each material tested as opposed to the original method that had the blade make passes until cut through was achieved. If a material makes it to 60 rotations with no cut through then the new test goes into effect as it has reached the point that the blade has been blunted enough that it can no longer achieve cut through.

While the Coup test would continue to be used and the resulting score would be reported on the EN 388 symbol as it has always been, two new markings have been added to show results from the TDM-100 cut test as well as a newly implemented impact test. 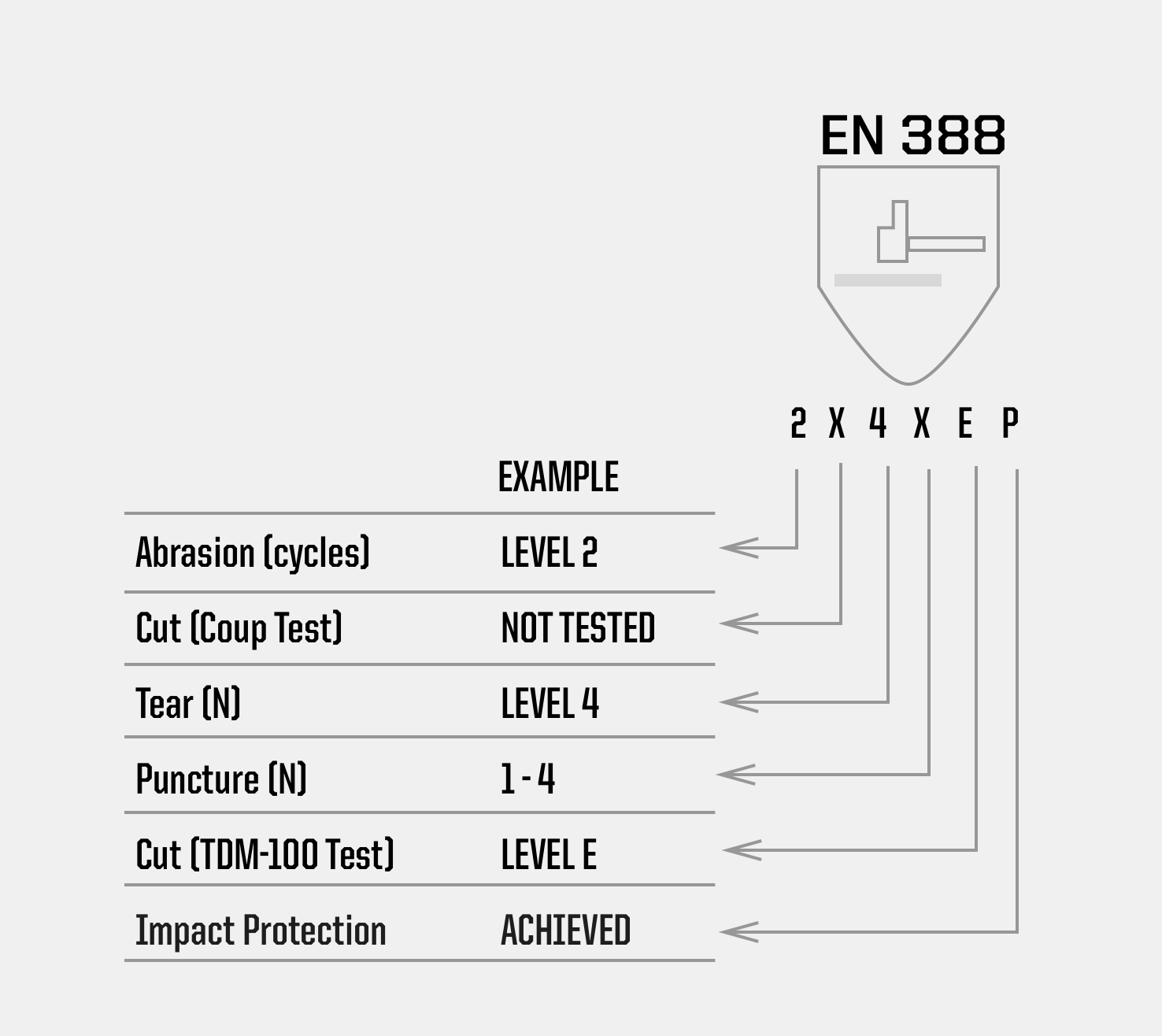 The new designation for cut resistance is measured on a scale of A to F with F having the highest cut resistance. These new measurements are given based on how many newtons (units of force) are required to cut through the material rather than on the grams to cut measurement used by the ANSI cut scale. Despite this the new scales are roughly analogous to each other and match up closely with EN 388 cut level A matching ANSI Cut 1. The only difference being that the EN 388 scale ends at F while the ANSI scale has 3 more levels.

What this Means for you

These changes were ultimately done so that you, the consumer, can have better information available to make the best selection of cut resistant gloves for your needs. With these new changes in place you can better see how protective a given glove is with the confidence to know that they were tested properly and held to a strict requirement.

Use the safety filters while you are shopping to find the right gloves for every project.